Jason Blum and Mark Duplass produce the found footage film CREEP (2014).  Duplass does triple duty as writer and star (along with Patrick Brice) in this film in which Joseph (Duplass) is a man dying and wants someone to film his story for his surviving child.  Aaron finds Joseph’s online inquiry and immediately takes the opportunity which will help him out financially. 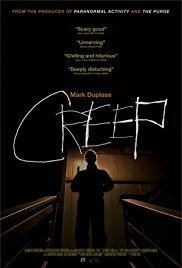 Immediately upon meeting Joseph, Aaron thinks that there just isn’t something right with Joseph as he’s a bit eccentric and that not everything he’s telling Joseph adds up.  When Aaron’s car keys go missing he is forced to stay the night at Joseph’s house and things get even more strange prompting Aaron to get out of there as soon as possible.  But escaping Joseph’s house is just the start of Aaron’s problem as he soon learns that Joseph knows everything about him and been stalking him thinking that they are best friends.  Now Aaron must figure out how to handle Joseph’s unwanted friendship before things get really out of hand amid mounting danger.

The whole film is shot as if it was from Aaron’s camera as part of Joseph’s video but once Aaron leave’s Joseph it becomes Aaron’s way of coping with the strange situation he finds himself in and a document of what is really going on.  Duplass does an excellent job crafting a unique and creepy character while Brice’s Aaron is the every man.

The film may not keep you on the edge of your seat in a suspenseful way but it more than makes up for it in terms of the “creep” factor so if that is the type of film you’re looking for then this one is it.