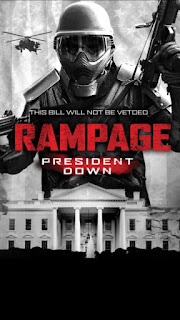 Brendon Fletcher returns as terrorist Bill Williamson in the final film in the Uwe Boll directed trilogy RAMPAGE: PRESIDENT DOWN (2016).  After the events of the previous film, Bill has been in hiding after faking his death to the world.  His ideology about a decaying world crumbling around us that we must take back by any means necessary has not allowed him to find peace but has led him to his ultimate task which is the assignation of the President of the United States.  It’s easy for a man thought dead to come and go as he pleases without being noticed.  After he assassinates the President (and the next ones in line), two FBI agents assigned to the case (Steve Baron and Ryan McDonell) soon discover that the most notorious mass murderer in America is alive and responsible for the greatest act of terrorism on US soil.

Now Bill is at the center of a massive FBI manhunt and he will stop at nothing to protect his ideas and get his word out to the world by any means necessary no matter who must die or get in his way.

Make no mistake Bill is a well-armed mass-murderer who kills those he believes is responsible for the decay of the American people.  He continues to fill the layperson with hope that things can change as long as you wake up and make that change.  One of the most interesting things about the Bill Williamson character is that he is the “extreme” of his belief system and is only doing what most other people wish they could.  It is through Bill’s extreme motivation and actions that a compelling story unfolds among the chaos of an action film.  Infamous director Boll (who has directed all three films) co-wrote this film with Fletcher (as they did with the previous film) and has crafted a trilogy of terrorist-style film that resonates because of its extremity.  Fletcher has crafted one of his most compelling characters and Boll’s film gives him a lot of space to craft a more well-rounded character especially since we see Bill as a father of a newborn with a girlfriend (Crystal Lowe).

Boll’s style of film is an acquired taste but there is no denying that his films push buttons and give you something to think about long after the credits roll and in his three decades of producing films you never know what you’re going to get but the ride is definitely a polarizing and interesting one.