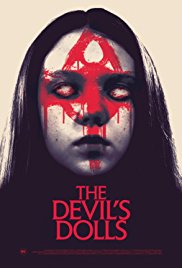 THE DEVIL’S DOLLS (2016) is a thriller that concerns itself with the story of worry dolls.  Written by Danny Kolker and Christopher Wiehl and directed by Padraig Reynolds the film concerns a police detective Matt (Wiehl) who has just captured a serial killer who died while being apprehended.  While taking some of the evidence home his car, his daughter Chloe (Kennedy Brice) takes with her a wooden box filled with little dolls that she thinks are trinkets.

Chloe ends up using the dolls as jewelry to sell to people that come into her mother’s store.  When the people who have purchased the dolls start going homicidal and killing loved ones it appears like there is more to Matt’s serial killer than he original thought.  When Chloe becomes ill after coming under the influence of the doll’s power, Matt must put aside his beliefs to discover the true nature of the worry dolls and how to save his daughter before she becomes another victim.

Although the cast does an excellent job the film itself isn’t all that interesting in terms of story.  It’s a very subtle horror-thriller in which when the horror happens there is nothing that you haven’t already seen before.  This being said, the film looks great with Adam Sampson behind the cinematography.  The story itself isn’t that bad either and is written very well, it’s just that the overall film is just a little lacking probably due to the subject matter.

Reynold’s is a very capable director having done the film Rites of Spring (2011) and I’m looking forward to his latest film Open 24 Hours (2018) which I’m sure will be a step up for him.