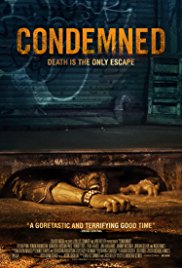 CONDEMNED (2015) is the story of Maya (Dylan Penn) who can no longer stand to be living under the safety of her parent’s roof, so she’s moves out to live with her boyfriend Dante (Ronen Rubinstein) in an abandoned and condemned apartment complex inhabited by seedy individuals and couples who cannot afford to stay in a real place.  When a deadly virus is let loose in the building turning everyone infected in to murderous and crazy lunatics who also hallucinate, Maya and Dante must fight there way through to get to an exit no matter what.

Written and directed by Eli Morgan Gesner this is a fast paced and gory film from beginning to end that takes its cues from David Cronenberg’s Shivers (1975).  Although the plot is pretty bare bones horror fans will love the extreme gore and gross-out body horror on display and there is even some really well-done action sequences and cinematography.  Although some performances are all over the place, this is acceptable in this film where most people get infected and everything pretty much goes bat-shit crazy.  Another film that this film references is [REC] (2007) and its remake Quarantine (2008) and fans of those films will enjoy this one.