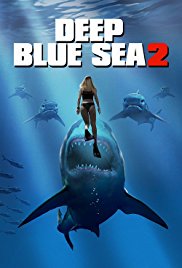 It seems that you can teach a bull shark new tricks in the horror film DEEP BLUE SEA 2 (2018).  Billionaire Carl Durant (Michael Beach) has assembled a group of talented scientists lead by lead bull shark specialist Misty Calhoun (Danielle Savre) to reveal his latest accomplishment which is that he has been experimenting with bull sharks making them smarter, more aggressive, and extremely dangerous to the point that these cause Durant’s research facility to be flooded allowing the sharks access for the killing spree.  Now Misty and the rest of the scientist must find a way to the surface while trying to escape bull sharks that see all of them as easy prey and easy game.

Like the original 1999 film, an underwater facility that’s gets flooded is the ticking time bomb for the cast to find a way to safety.  But unlike the original film, this film is filled with sub-par acting (probably due to the bad script) with even worse CGI effects.  Very little originality is had in this film which borrows heavily from the original film.

The film is written by Erik Patterson, Jessica Scot, and Hans Rodionoff (who also provides the story) and directed by Darin Scott, whose previous films include Dark House (2009) and the less interesting American Horror House (2012) and A Housekeeper’s Revenge (2016).  This film lacks any real suspense and there are only a few genuine moments or gore that are interesting.  Otherwise, this is a pretty forgettable sequel.