Mickey Keating has made a career of crafting some tense thriller films about a limited cast trapped in harrowing circumstances such as Ritual (2013), Darling (2015), and Pod (2015), to name a few so it is with no surprise that he continues this trend in CARNAGE PARK (2016).  Vivian Fontaine (Ashley Bell) is having a bad day.  While she is trying to get a bank loan, two thieves rob the bank and take her hostage after the robbery gets botched and one of them is mortally injured. 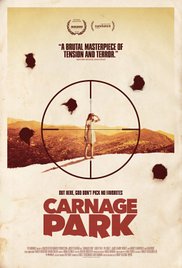 During the getaway the bank robbers find their way to an abandoned road where they try to plan their next mood.  One of them dies from their fatal wounds while the other decides to keep Vivian as insurance.  Vivian’s situation seems bright at first when a shot rings out of the air and kills the final robber but the man responsible is a deranged ex-military sniper who doesn’t take too kindly to people who trespass on his land no matter what reasons.  Vivian then finds herself as prey to the sniper as she is now trapped on an open range where there are few places to hide and there are more horrors in store the deeper she explores.

Bell does an amazing job carrying the film while Pat Healy is the psychotic killer Wyatt Moss.  Bell continues to make interesting choices as an actress and constantly surprises.  I particularly love her performance as Nell Sweetzer in The Last Exorcism (2010) and The Last Exorcism Part II (2013) as well as The Day (2011).  The film itself is just okay as Keating knows how to stage some suspenseful scenes but it just doesn’t intrigue as much as some of his previous films.