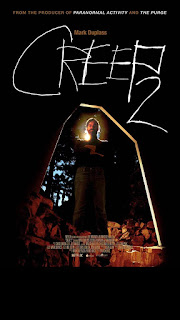 Writer/Director Patrick Brice and writer/star Mark Duplass return to craft the next chapter in their found footage/serial killer saga CREEP 2 (2017) in which we find our serial killer now calling himself Aaron (Duplass) now turning forty and in the middle of a mid-life crisis as he doesn’t know what to now do with his life.  At the end of the previous film he killed the real Aaron, an inspiration to him but he now films his killing spree to be more like a regular job instead of the fun hobby it’s supposed to be.

Sara (Desiree Akhavan) is an internet personality who has lost all inspiration for her show Encounters which is on its last leg.  Both Sara and Aaron are at a cross roads when Aaron hits on the idea of doing a documentary film in which he can reveal his true nature in front of the camera and show the world his true nature.  Sara answers his ad to film his story seeing it as the wake-up call she needs to jump start her career again.  Now, two people who have lost their inspirations will find it together in this twisted and imaginative sequel.

This is a more interesting film since it is revealed right away to Sara that Aaron is a serial killer; she just doesn’t believe him and even though she comes to learn that he is eccentric and at times a “diva” she still finds him a captivating subject that she just can’t get away from.  In turn, Aaron finds Sara interesting because she is the first person where he’s truly been able to be himself and not hide behind all the fake personae that he’s created to justify his horrific actions.

This film has a lot going for it and is a much better film than the previous film in terms of story and execution and its truly chilling to see Duplass revel in the role of the misunderstood serial killer.  I hope they continue this fascinating franchise about the inner workings of a serial killer.