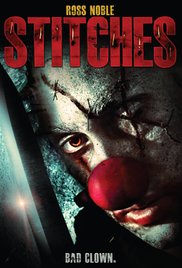 Richard “Stitches” Grindle (Ross Noble) is probably the worse birthday clown that money can buy.  During what should have been a standard birthday party for a young Tommy (Ryan Burke) and all of his friends, an accident happens leaving Tommy witnessing the death of Stitches in his own home.  This is how Irish horror film STITCHES (2012) begins.  Years later, Tom (Tommy Knight) is now grown and in high school but still suffering from having witnessed the death of Stitches in his house especially since his birthday is near.  Tome has become a recluse who has lost most of his old friends or they have distanced themselves from him but his best friend Vinney (Shane Murray-Corcoran) convinces him that its time to throw a party to get over his past and to help him rekindle the friendship of Kate (Genna-Leah Devereux), his crush from when he was a little kid.

When Stitches returns from the death to avenge his death on all the people responsible, Tom must over come his childhood fears in order to find a way to defeat Stitches before he kills all of his friends and Kate.

Although the actors are all young, they come off as very genuine teenagers just getting into teenage things.  Written by David O’Brien and Conor McMahon (who also directs) the film is actually a pretty effective and funny horror film for fans who like good gore-gags.  There is little to no suspense to be had in the film but that doesn’t seem to actually be the point as it’s most interested in crafting interesting and realistic characters (and not caricatures) while also being an entertaining thrill ride with equal parts comedy.

The film definitely has an Irish flavor to it but that’s what sets it apart from the average US production and gives the film atmosphere and character.