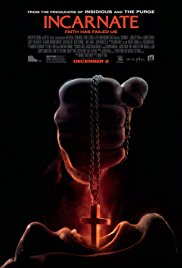 I’ve never been much of a fan of director Brad Peyton’s films which includes Cats & Dogs: The Revenge of Kitty Galore (2010), Journey 2: The Mysterious Island (2012), and San Andreas (2015), so I’m not surprised that I didn’t really care for his film INCARNATE (2016) which has an interesting premise.  Dr. Ember (Aaron Eckhart) has a unique ability which is he can go into dreams and mind possessed people to help exorcise demons.  This is a great idea on how to modernize the exorcist film through science instead of religion and faith.

Ember is brought in by a colleague Camilla (Catalina Sandino Moreno) who believes a young boy Cameron (David Mazouz) is possessed by a demon.  Ember is a haunted man who with each demon he exorcises he gets weaker and weaker, but he takes on Cameron’s case when it’s clear that the demon possessing him is a demon he’s confronted before.  Ember will sacrifice whatever he has to in order to confront the demon one final time no matter the cost.

Peyton does a great job setting up the film’s key set pieces, but they all feel rushed like an action film (something all his other films have key to) and lack the nuance or suspense of a horror film.  One wonders why he decided to tackle a horror film in the first place.  Eckart does an amazing job (as usual) and does the best he can with the material but there is no denying that the tone and pacing of the film is that of an action film which weakens the most horrific elements making this a merely adequate film and nothing all that special.