Ursula Andress (or Dr. No) and Mike Hammer: Private Eye and Prison Break) star in the cannibal film Mountain of the Cannibal God (1978).  Susan Stevenson’s (Andress) anthropologist husband disappears into the jungles of New Guinea and she enlists the aid of fellow colleague Dr. Edward Foster (Keach) to lead her into the heart of the jungle in search for him.  On their way through the jungles to the mountain of Ra-Rami, Stevenson and Foster will encounter great jungle dangers including the locals and a tribe of cannibals who would rather be left alone.  The cannibals are just one of the many obstacles in front of them as trust and misdeeds lead them all on a journey that none of them may soon come back from.
Stacy Keach (of TVs 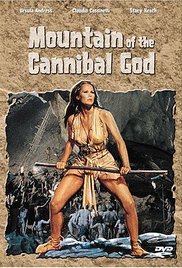 There are many different things going on in this film as it is not just a film about cannibals (but that was the biggest selling point for the film in the late ‘70s) and crafting a film in which all the main characters have their own hidden agendas adds a little something to the ambiance of the film in addition to crafting a story that plays on many different levels.  This being said there is plenty of cannibal horror to be had in the film and it will satisfy fans of the genre although many of its charms will be lost on modern day audiences with no reference to this sub-genre of horror film.

I’ve never been a big fan of the cannibal film genre and I don’t particularly care for most of the films contained therein but this film is more than just a cannibal film and therefore may appeal to those audiences outside this niche genre.  This being said, it still contains most everything one would expect from an Italian cannibal film only with a higher class of actors.
Posted by Kevin L. Powers at 8:52 PM