Film Review: THE DUNGEONMASTER (aka RAGEWAR) (1985) 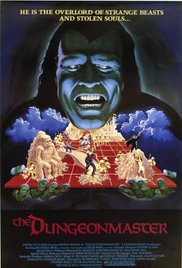 Fantasy and science fiction collide in the Charles Band production The Dungeonmaster (aka Ragewar) (1985) which sees Paul Bradford (Jeffrey Byron) getting sucked into an alternate world by wizard Mestema (Richard Moll) who thinks Paul’s an opponent ripe to be put into his games of death.  Mestema takes Paul’s girlfriend Gwen (Leslie Wing) hostage in order to make sure that he does exactly as he is told.  Mestema puts Paul through a series of games and challenges to see if he is a worthy opponent and if he survives each challenge then he gets one step closer to saving Gwen and getting out of the Mestema’s hell alive.

The unique aspect of the film is that each challenge Paul is given is set in a different world which is directed by a different person making the film appear more like an anthology film.  In addition to Band directing a segment, segments are directed by David Allen, John Carl Buechler, Steven Ford, Peter Manoogian, Ted Nicolaou, and Rosemarie Turko.  Each bring a unique style to their segments while contributing to the overall look and feel of the film.

Although dated, the film itself has an ‘80s fantasy film quality that makes it one of the more entertaining films to come out of the Band camp of films.  Moll makes the most of his role as only he can keeping the film light and campy in the way expected of these types of films.  If you’re a fan of these types of fantasy films then this film is right up your alley.
Posted by Kevin L. Powers at 8:36 PM