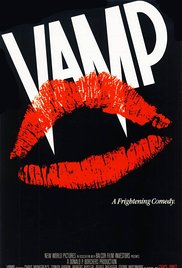 Vampires don’t get any sexier than Grace Jones in the ‘80s cult classic Vamp (1986)!  Two fraternity brothers Keith and AJ (Chris Makepeace and Robert Rusler, respectfully) are task with getting the entertainment for their frat party.  The only place to find that “special” type of woman is at a strip joint in the city so the two, with fellow college mate Duncan (Gedde Watanabe), find themselves at a sleazy strip joint and bar with a very simple task until they come to realize that the place they’ve found themselves in is home to a den of vampires lead by the alluring Katrina (Jones).   Also, along for the ride is Allison (Dedee Pfeiffer) a waitress at the vampire club who helps Keith survive the night and figure out the truth of what’s going on.
Vamp is a cult classic vampire film of the ‘80s mostly remembered because of the starring turn by Jones.  Written and directed by Richard Wenk (story by Donald P. Borchers and Wenk) the film is a vampire film that gets into the dirty under belly of horror films of the ‘80s literally as it primarily takes place in a strip joint and in the streets of the city where gangs and vampires are just part of the regular night life.

Even after thirty years the film still holds its allure and never seems dated mostly because there are so few actresses that have been able to make a mark as a seductress such as Jones who has immense sexual appeal while also being extremely dangerous in a film that never skimps on the comedy and gore.  This is an entertaining film that showcases the best of what the ‘80s were capable of.
Posted by Kevin L. Powers at 8:41 PM