The demon Angela is back and this time she has her sights set on reuniting with her sister Melissa in Night of the Demons 2 (1994).  Amelia Kinkade returns as the demon Angela who sets her sights on the students of St. Rita’s High School who think that the legend of Hull House is nothing but a legend but they will soon learn otherwise. 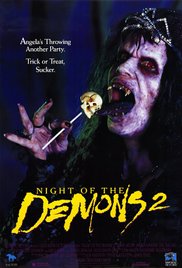 Melissa (Merle Kennedy) is bullied at school and called Mouse by her fellow students.  She’s had a hard life especially considering that everyone knows she’s related to Angela but think that everything associated with Hull House is just a myth.   Things for Melissa are even more complicated as Father Bob (Rod McCary) disbelieves the legends and the only one that seems to understand her is Sister Gloria (Jennifer Rhodes).  When a group of her classmates trick her into leaving the school grounds to go to Hull House, Melissa finds herself having to confront her past and her older sister who has nefarious plans in store for her.  When Angela finds a way to leave her prison at Hull House she brings her brood on demons to St. Rita’s where there will be no stopping her from spreading her demonic influence.

Although it is very predictable, the fun of this film is in the fact that it’s a very campy and entertaining demon film with a flare in its direction by Brian Trenchard-Smith, who also is behind Dead End Drive-In (1986), Leprechaun 3 (1995), Leprechaun 4: In Space (1996) and Megiddo: The Omega Code 2 (2001), to name a few.  He’s spent his whole career behind low budget sci-fi and horror films.
Posted by Kevin L. Powers at 8:46 PM