Cultural ghost stories are always interesting as they try to meld two different cultures into a seamless ghost story that entertains and does justice to both cultures.  The House Where Evil Dwells (1982) is one of these films that manages to be both an entertaining ghost story and the story of an American family being terrorized by a three Japanese ghost.  The Fletcher family have moved into the perfect Japanese home not knowing that it is the place where a samurai warrior killed his wife and her lover before taking his own life.  Soon the Fletchers begin to find themselves being possessed by the Japanese spirits as they relive the moments of the spirits’ lives before they died which leads them on a deadly course that may have them reliving the fate of what happened to the Japanese spirits. 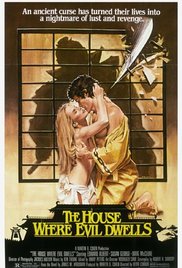 Edward Albert and Susan George star as husband and wife Fletcher whose fates lie in whether or not they can break free of the Japanese ghost before it is too late.  Directed by Kevin Connor (who directed Motel Hell) the film is a character driven ghost story as you watch a seemingly perfect family decay under the influence of jealous ghosts.   It’s a slow, yet deliberately paced film that still holds up thirty years later.  Albert and George are especially good as the perfect couple whose lives fall apart due to the influence of ghosts.

Although it might seem passé for some audiences looking for more shock value in their horror films this is a moody and atmospheric ghost story that gets under the skin without peeling it away and showing all the veins underneath.