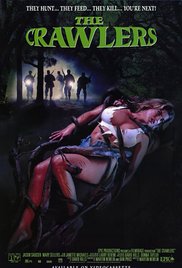 People are disappearing and being killed in the film Contamination.7 (1993).  It’s not long before the local townspeople realize that people in the government have been illegally dumping toxic waste into the forest which have had the unexpected side effect of contaminating the plant life creating killer plants willing to kill anything that they come into contact with.
Rossella Drudi is credited with the script (but it is also written by Fabrizio Laurenti and Albert Lawrence and Daniele Stroppa) and directed by Joe D’Amato and Fabrizio Laurenti.  The film lacks any real suspense or thriller aspects and the special effects are very dated but if you’re a D’Amato fan then the film holds some charm.  It’s definitely a product of its time and a film that’s more remembered for being a D’Amato film than for anything else.
Posted by Kevin L. Powers at 8:39 PM