Film Review: HELL OF THE LIVING DEAD (aka NIGHT OF THE ZOMBIES) (1980)


An accident at a chemical plant unleashes a horrific virus turning everyone into zombies in director Bruno Maittei’s Hell of the Living Dead (1980).  An elite SWAT team is sent into New Guinea to investigate the accident but what they find is an endless supply of zombies and a reporter and her team caught in the middle of it all.  Time is running out for the SWAT team who even with their massive fire power keep coming against bigger hordes of the undead. 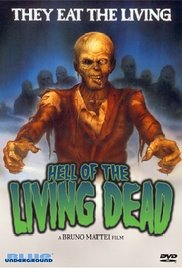 Hell of the Living Dead is not one of Maittei’s best films (nor is it one of his worst) and its charms will be lost on modern day audiences as it relies on excessive gore and outrageous humor as most Italian films from the ‘80s but for those interested in an outrageous zombie film before they got all serious in the modern age then this film is a brain-dead entertaining joy ride as only Maittei can unleash.

Not a film for the casual viewer but for horror fans who know what they are getting into before they watch the film.
Posted by Kevin L. Powers at 8:50 PM