There is a deadly temptress plaguing the bars of New York City killing men one by one in the film Def By Temptation (1990).  Joel (James Bond III) has decided to make a trip to the city to visit his best friend K (Kadeem Hardison) because he’s having a crisis of faith.  Joel is from the country where he has been studying as a minister-in-training but journeying to the city his eyes has been opened to the underbelly of the dark side of life starting with a dark temptress (Cynthia Bond) whom shows him passion and seduction like he’s never experienced before in his life. 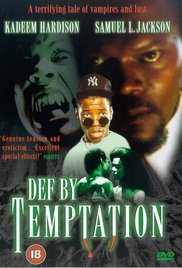 Now with the help of K and Dougy (Bill Nunn), a barfly who knows more about the suspicious disappearances of men, Joel’s faith will be tested as will his soul as he must overcome the greatest evil he has ever faced.  Written and directed by Bond the film is a character driven film about a man whose sheltered life and faith is tested when he comes up against an unspeakable evil.

Def By Temptation has a unique charm in that it is a film made up entirely of an African American cast and is a horror film with a female antagonist that is ruthless and relentless while also tackling the ideas of faith and religion in a battle between good and evil.  Some of the film’s techniques may seem dated and simplistic but the story itself holds up well despite these flaws.
Posted by Kevin L. Powers at 8:43 PM