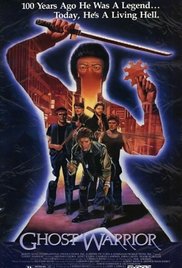 In Ghost Warrior (1986) the body of a 400-year old samurai warrior entombed in ice is discovered by a couple of skiers exploring a random cave.  The body is then delivered to a lab in the United States where it is revived through the science of cryosurgery.  The samurai warrior is trapped in a time and place he doesn’t understand and soon escapes the lab in search of where he belongs.  As he explores the city and gets a taste of this new age that he doesn’t understand he realizes that his code of honor and conduct are two things lost in time just as he is and he finds himself on a journey to find a place where he belongs.

There is lots of bloodshed and death left in the wake of the samurai warriors path making him enemy number one with the cops as the scientists who revived him realize that they are on a ticking clock to get the samurai warrior back into their custody before it is too late.

This is a standard fish out of water story handled with more bloodshed than the normal film and more action.  Even though you get a sense of how the samurai warrior got into his predicament, you never get a sense of why he continues to do what he is doing beyond the obligatory reason (and to progress the plot and film forward).  Because of the use of cryosurgery the film is very dated yet is entertaining in a mediocre ‘80s action movie kind of way so it will definitely appeal to fans of those types of films but for everyone else it’s just a product of its time.
Posted by Kevin L. Powers at 8:34 PM