The Beast of the Apocalypse has been buried for over 400 years beneath a monastery where the secret has been kept until a female school teacher and an American priest uncover the truth in the film Catacombs (aka The Curse IV: The Ultimate Sacrifice) (1988).  Laura Schaefer is the school teacher Elizabeth Magrino who has been invited to the monastery to photograph everything.  Her arrival coincides with the release of the Beast who has influence over everyone that comes near him which he uses to kill and/or possess people into furthering his escape from his prison.  Elizabeth must overcome not only the slow possession of the Beast but the open sexism placed upon her as the first woman to ever be allowed access to the monastery.

Time is running out as the more people the Beast kills the stronger he becomes until he is able to release himself from captivity. 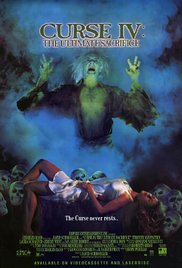 Written by David Schmoeller and R. Barker Price and directed by Schmoeller (who also directed Netherworld, Puppetmaster, Crawlspace, and Tourist Trap) the film is well made but is not one of his better films.  This being said it is entertaining in a ‘80s horror film kind of way and will appeal to those who love the films of Full Moon Entertainment.
Posted by Kevin L. Powers at 4:12 PM