Ten years after the events depicted in the original film Monsters (2010) the “Infected Zones” have spread over the entire world creating a global epidemic.  In Monsters: Dark Continent (2014) the Army must put together a new type of soldier to combat the growing threat but the soldiers in this film who are sent into the Middle East to help stop the problem have more than just giant monsters to contend with as dangers lurk in every corner and in every shadow in this war film in which the giant monsters take a back seat to the insurgency of man. 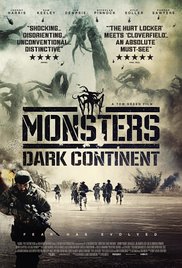 Written by Tom Green and Jay Basu this is a film that puts the audience right in the middle of the war in the Middle East.  The group of soldiers is made up of mostly rookies who have never spent a tour of duty facing the giants head on.  Leading the group is Noah Frater (Johnny Harris) who volunteers to go on yet another tour avoiding to return home to his family because the only war he knows how to deal with is on the battlefield.  But as he and his group of men go deeper into the trenches he soon learns that everything that he has ever known both in terms of the giant monsters and the human monsters that he’s used to fighting is about to be turned upside down.

As usual, the biggest problem with the film is the fact that the cast is huge and for the most part they are all cannon fodder.  Unlike the original film which was very intimate and focused on the two main characters for most of the running time of the film, this film has too many characters to get to know (at least until most of them are killed off).  The film also tries to use the monsters as a background element forcing you to follow the more human conflict in the film.  This tactic worked well for the original film where the cast is much smaller but here it seems like the monsters are a wasted element.  Now the monsters are seen more in this film than in the previous film but its more as a sense of “awe” and “wonder” but in a war film this is lost (at least until the cast is dwindled down to a handful of characters).

Directed by Green himself, the film is not an entirely bad film but it does lack the ambiance and awe of Gareth Edwards original film even as it opens the possibilities of future films set in a world of giant monsters.