Leave it up to the film makers in the Netherlands to come up with yet another way to make a zombie film into a zany comedy which is the case with Kill Zombie! (2012), an outrageously funny film about a group of survivors trying to survive in a world overrun with the undead. 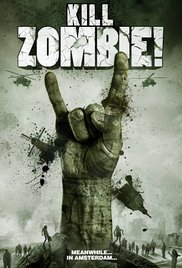 Aziz (Yahya Gaier) is in love with a co-worker who won’t give him the time of day until the world is overrun by zombies and she gets trapped in a building and needs him to rescue her.  Now with the help of a blond cop by the name of Kim (Gigi Ravelli) and a group of other survivors, Aziz must go into the heart of the city to save the woman he loves or die trying.  Unfortunately, Aziz is not really the hero-type so everything he does never goes as planned.  As the zombie horde grows larger, Aziz must decide whether or not the danger to save the woman he loves is too great.

For a horror-comedy writer Tijs van Marle and directors Marijn Smits and Erwin van den Eshof have crafted a film full of gore, full of zombies, and full of zany fun but if you’re looking for something new and original, it isn’t here.  Just about every angle for a zombie-comedy has been done before and there is nothing new in this film and it doesn’t really try.  The film-makers know exactly what type of film they are trying to make and they know their audience and they deliver the goods from beginning to end.

If you enjoy having a good time with gore and humor in your zombie film then you’ll enjoy this film despite the fact that it feels like a film you’ve already seen before (just this one is from the Netherlands).
Posted by Kevin L. Powers at 5:52 PM