Director Adam Green is a believer in monsters.  He has been ever since he was a small child.  When he meets eccentric William Dekker (Ray Wise) he is taken on a journey he will not soon forget.  In Digging Up the Marrow (2015), Adam is intrigued by Dekker’s story of a place beneath the ground called the Marrow in which monsters have retreated from the eyes of man in a place safe to them.  Adam and his camera man and frequent collaborator Will Baratt to decide to document their journey with Dekker hoping that Dekker is telling the truth so that they will have definitive proof that real monsters do exist. 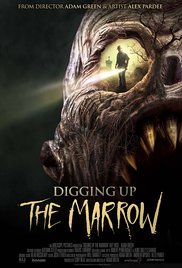 Adam is a believer who wants to see the truth in the stories that Dekker tells him even in the face of
contradictions that leave him believing that Dekker is not telling him the full truth but when he doesn’t heed Dekker’s warnings to proceed cautiously when facing the monsters of the Marrow he gets more than he bargained for and the truth will be a horrifying revelation more dangerous than anything that he could have ever imagined.

Green (the director) crafts a very smart documentary style fiction film which utilizes interview footage and actual documentary-style footage to tell a tale unlike anything he’s ever done before.  Green has made a career at crafting films that appeal to horror fans from his slasher hit Hatchet (2006) and its first sequel Hatchet II (2010) to the psychological thriller Spiral (2007) and the man versus nature film Frozen (2010).  With Digging Up the Marrow he gets to the heart of the ultimate question that all horror fans have which is “Do Monsters Exist?”

Although this may be one of his most reserved films (especially when you put it next to the Hatchet films), it is nevertheless an amazing addition to his oeuvre and career and one not to miss.   You are warned.  You are warned.
Posted by Kevin L. Powers at 5:50 PM