The Final Girls (2015) is a loving tribute to ‘80s slasher films while also being an ‘80s slasher film itself, only with a modern twist.  Max Cartwright (Taissa Farmiga) is trying to get over the death of her actress mother Amanda Cartwright (Malin Akerman), who was famous for being a scream queen from ‘80s films.  When the local movie theater decides to do a special screening of her mother’s most infamous film Camp Bloodbath she is reluctant to go as she still hasn’t come to terms with her mother’s tragic death. 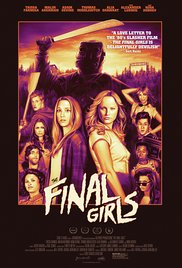 While at the screening of the film a fire breaks out in the theater forcing Max and her friends into the silver screen into the world of Camp Bloodbath forcing them all to live the movie.   Max must come to terms with seeing her mother “alive” again (but as the character in the film of Nancy).  Knowing that everyone dies in ‘80s slasher films other than the “final girl” Max and her friends must film a way home while also trying to film a way to save Nancy (her mother) who died in the original film.

The screenplay is written by M.A. Fortin and Joshua John Miller and directed by Todd Straus-Schulson, whose previous feature was A Very Harold & Kumar 3D Christmas (2011).
Posted by Kevin L. Powers at 5:01 PM