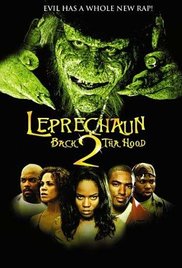 I’m getting around to reviewing this film now only because this happens to be the only one in the never-ending franchise that I had never seen (until now).  There is not much that can be said about Leprechaun: Back 2 Tha Hood (2003) but I’ll try anyways.  I never really cared for any of the films in the original franchise.  I think the original was very fun and successful only because of actor Warwick Davis as the Leprechaun character.  This can be said of all the films in the franchise including this film and if you’ve seen them all (as I now have) it’s because Davis seems to have so much fun playing the character despite how horrible the films actually are.

In this film Emily (Tangi Miller) has been told by a psychic that she will come into money which is what she really needs living in the ghetto and her rundown neighborhood filled with crime and gangs.  When she comes across a pot of gold she believes that her fortunes have changed for the better not realizing that the gold belongs to the mythical Leprechaun (Davis) who will stop at nothing to get all his gold back, now Emily and her friends must film a way to rid themselves of the evil Leprechaun while also finding a way to keep the gold as they don’t want to return to the way of life before the good fortune of the gold.

This film is not entirely bad as it does give a better back story to Emily and her conflicted life living in a poor world consumed by compromise upon compromise.  She wants a way out of her old life and sees an easy out.  Miller is also one of the better actors in the entire Leprechaun franchise and Davis is at home in his character.  This being said, the film still has many flaws and will only really appeal to fans of the franchise who have managed to stick through to the bitter end (this being the final film in the Davis franchise).
Posted by Kevin L. Powers at 5:02 PM