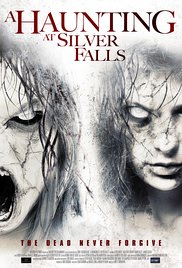 There is nothing simple about living in Silver Falls as Jordan (Alix Elizabeth Gitter) will soon find out when she is forced to move there to live with her aunt and uncle in the film A Haunting at Silver Falls (2013).  Jordan’s parents have both recently died and she has been placed in the home of her Aunt Anne and Uncle Kevin (Tara Westwood and Steve Bacic, respectfully).  What puts Jordan on edge even more is the fact that her aunt and mother were twins and so she is constantly reminded of the death of her mother.  Her only escape is with her classmate Larry (James Cavlo) who she immediately takes a liking to.

When Larry takes Jordan to a party she mistakenly finds a ring in the woods and puts it on her finger not knowing that it won’t come off no matter how hard she tries to remove it.  It’s not long before she starts experiencing strange things and seeing images of twin dead sisters who begin haunting her and who are connected to the ring on her finger.  With the help of Larry, Jordan must find out what the ghosts of these two girls want and if she can solve the mystery before everyone around her thinks she’s become unsettled and crazy.

This is a film that could have gone south really quickly as do many haunted and ghost films but it is anchored by some pretty good performances by the cast all around and a story that doesn’t go where most people expect it to.  It’s actually a pretty good film that’s well done and not a time waster but may go under the radar because of the generic title and the fact that the ghost and paranormal genre is so cluttered with films (it took me a while to finally get around to it).
Posted by Kevin L. Powers at 8:28 PM