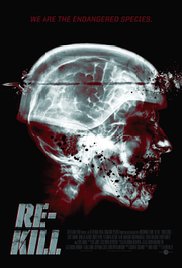 It’s been five years since the Re-Animates (better known as zombies) outbreak and the world has tried to move on from the decimation of most of the world’s population.  It is up to the military’s R-Division to handle the Re-Animates when there is a problem and the film crew of Re-Kill (2015) to film it.  In a world where zombies almost out number humans the members of R-Division are task with keeping the public aware of the fight against the undead.

Told from the perspective of a “live” television show (complete with commercials and ads) the program Re-Kill is all about getting into the mind of the soldiers on the front lines before and after their deaths in real life (as most of them die in combat).

The film is written by Michael Hurst and directed by Valeri Milev and it is a film that horror fans will enjoy.  It has enough horror, gore, and zombie action to satisfy even the most jaded.  Even the style of the “found footage” or “reality show” style won’t deter you from enjoying this film as it plays like a war film on zombie crack.  The make-up FX are excellent and the action sequences are fierce and numerous.

If there is one thing working against the films, it’s that you never really get into the heads of any of the soldiers except for maybe one but then that also works in the film’s favor as you never know who is going to live or die which is the element you want in a good horror film.  A film I recommend for fans of zombie films.
Posted by Kevin L. Powers at 6:24 PM