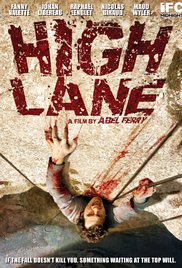 The French thriller High Lane (2009) is a tense and suspenseful film that takes six friends up through a hiking and mountain trail.  It’s not long before they learn that the trail was shut down due to repairs but once they discover that they are at the point of no return and must continue on the journey in order to find an alternate route of escape.  It’s not long before they discover that not only do they have to contend with the natural dangers of the trail but that someone is on the mountain with them killing them one by one and they must work together to find a way off the mountain before they all are met with an early death.

Written by Johanne Bernard and Louis-Paul Desanges and directed by Abel Ferry this is a film that’s meant to take you out of the comfort and safety of home and put you in the middle of nature’s elements and dangers.  If the dangers or nature weren’t enough the six friends must also contend with personal problems and fears that also threaten to destroy the group from within.

This is a very tense film before the mountain killer even enters the picture and the film constantly reminds you that anything can happen at any time which works in the films favor and keeps audiences on the edge of their seat.  The film has a very capable cast that carry the film especially considering all the emotional and relationship problems facing them before the external dangers show there face.  This is important in order to set up the characters who are anything but 2-demensional.

Modern French horror films are some of the most interesting and visceral out there right now and this film is no different so if you are a fan of French horror cinema then you will enjoy this film.
Posted by Kevin L. Powers at 8:30 PM