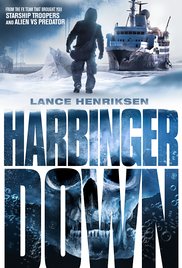 Special effects and creature creator Alec Gillis takes to directing with his debut feature Harbinger Down (2015).  Having worked on such creature features as Alien Nation, Leviathan, Evolution, and the Tremors and Alien franchises, Gillis is no stranger to monsters of which Harbinger Down has an interesting one.
Graff (Lance Henricksen), captain of a crabbing boat takes his daughter and her group of student researchers into the Bering Sea to study the effects of global warming on a pod of Belugas.  When they come across the wreckage of a Soviet space ship, which until recently had been buried in the ice, greed sets in because of salvage rights but that will be the least of their worries as the Soviets were experimenting in deep space and the organism that they created has thawed out and seeks blood.  Now everyone on Graff’s ship is in danger especially considering that the creature is constantly mutating and getting stronger and smarter as time goes on.

If you’re looking for originality, then this film is not for you as this film has borrowed from many other films that came before it but there is no denying that the film is very well done and anchored by Henricksen’s always dependable performance as he gives 110% even on the lowest budget of film.  The film is also given better than expected SFX for the monster and the film is never boring as Gillis (who also wrote the screenplay) has learned a lot from all the directors he has worked with over his long career.  This may be his first film but he is definitely not a first time filmmaker as this film is very polished and looks great.

A lot can be said for a monster film that delivers on all that it promises and what is expected by audiences.  Gillis knows what horror fans expect and isn’t afraid to deliver the goods.
Posted by Kevin L. Powers at 4:59 PM