Sara (Natalie Dormer) goes to Japan to Aokigahara Forest in search of her twin sister Jess who has gone missing and presumed dead.  She soon learns that her sister Jess ventured into Japan’s so-called “Suicide Forest”, a place where people go to commit suicide.  This is the premise for The Forest (2016) which is the first major American film to take a look at the infamous real life place. 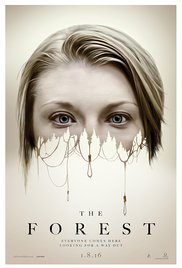 Sara refuses to believe that her sister committed suicide and ventures to Japan to find her sister even if no one else will help her.  She eventually convinces Rob (Eoin Macken), in Japan on assignment, to help her into the forest but when she refuses to listen to the advice of her guide to not spend the night in the forest and not to venture off the path, she starts to experience haunting visions that start to drive her mad and question her own sanity.  Soon she finds herself lost and with no way of finding herself back on the right path as the forest itself seems to close in on her and she can’t decide what is real and what is a living nightmare.

Written by Nick Antosca, Sarah Cornwell, and Ben Keith there is an interesting premise to the film but the concept relies too much on the jump scare and your typical supernatural horror film tropes.  It’s actually quite a well written film except you can tell that test screenings probably didn’t go over well and because of the slow build up.  The jump scares (and there are many) were probably added after the fact.  Without the jump scares the film would have been a moody and atmospheric and very effective but instead it’s just a mediocre film with a great concept that hopefully someone else will explore again.
Posted by Kevin L. Powers at 3:29 PM