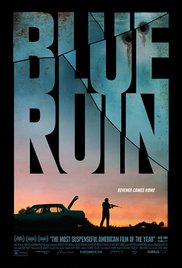 Blue Ruin (2013) is writer/director Jeremy Saulnier’s second feature after the cult favorite Murder Party (2007) and just like that film this film delves into the character of its main character that has deep rooted problems that drives the narrative forward.  His latest film takes a more realistic approach to the deep rooted trauma of the main character unlike the satire of his former film but both films are equally captivating and dark.

Dwight (  When he gets notice that a criminal connected to that past is suddenly released from prison it sets Dwight on a downward spiral of vengeance and murder that not only puts him into danger but the family he thought he was trying to protect.
Macon Blain) has been hiding from society after a tragedy in his past caused him to abandon his life and family into a nomadic existence as a homeless man who lives out of his car.


Since Dwight is in every scene it’s important that the audience understand what drove him into his nomadic existence and to how his road to vengeance is really his road to salvation.  Blain gives a phenomenal performance as the broken Dwight who summons every bit of courage he has to overcome his own personal and physical demons.

Unlike in Saulnier’s Murder Party everything is presented in a very realistic style and the cinematography goes a long way in presenting Dwight’s solitary existence.  This is a slow burn style film but nevertheless one that is captivating due to the strong performance of not only Blain but the entire supporting cast as well.
Posted by Kevin L. Powers at 3:26 PM