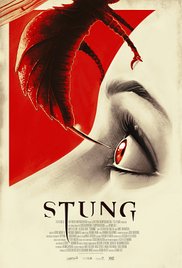 Mutated killer wasps turn to simple garden party into a nightmare in the giant monster film Stung (2015).  If you like giant monster films then you will enjoy this film in which stars Jessica Cook and Matt O’Leary as two hostess for the party who get stuck at the elusive party where everyone around them is being either killed by the giant wasps or become incubators for even bigger creatures.

Written by Adam Aresty the film is not only a great giant monster film but it also takes the time to develop the main characters as well.  Whereas most films of this type could care less about the “human” characters relying more on the monsters and the kills this films manages to balance both elements equally.  It’s also manages to craft some great kills and great CGI effects that don’t look (too) cartoony.  It’s a low budget horror film but you wouldn’t know it from the presence of such character actors as Lance Henriksen and Clifton Collins Jr..

The film is directed by Benni Diez who brings a nice flare to the giant killer monster film that’s both entertaining and written well with its own unique charms.  It’s good to see a monster film that doesn’t shy from the bloody stuff and isn’t too dumb (or watered down) for its own good.
Posted by Kevin L. Powers at 3:32 PM