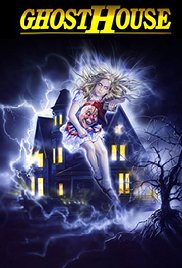 Umberto Lenzi (as Humphry Humbert) directs the haunted house thrilled Ghost House (1998) which for Italian audiences was known as La Casa 3 or an unofficial sequel to Sam Raimi’s Evil Dead films.  For those of you that didn’t know, The Evil Dead and Evil Dead 2 were re-titled La Casa and La Casa 2, respectfully, when released in Italy so many audiences know this film as a sequel to those films.  This film has nothing to do with those films and if you were expecting something in their style then you’ll be sadly remiss.

Instead, this film deals with a group of people drawn to a mysterious house because of a radio signal.  Once at the house the group begin to see and experience haunting imagery tied to a little girl and her evil doll.  AS each of them fined themselves alone in the house they meet a deadly demise and time is running out for them to discover the true history of the house and why each of them were drawn there.

Unless you’re a Lenzi fan then there is very little to recommend this film.  It’s very tame even for one of his films and unfortunately time has not been kind to it as it has dates pretty badly.  This being said, the film is typical Lenzi and there are some haunting images that Lenzi will immediately recognize.
Posted by Kevin L. Powers at 3:36 PM