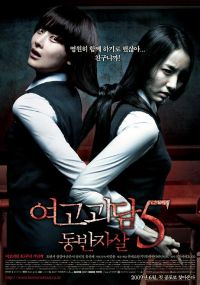 When you’re a teenager, life can be hard especially for four young girls who decide to make a suicide pact that goes horrible wrong in the South Korean thriller A Blood Pledge (2009).  Jeong-eon’s sister Yoo-jin’s (Yoo Shi-ae and Oh Yeon-seo, respectfully) suicide is anything but normal.  As she investigates further into the death of her sister she realizes that Yoo-jin and her friends Soy, Eon-joo, and Eun-yeong (Son Eun-seo, Jang Kyeong-ah, and Song Min-jeong, respectfully) entered into a suicide pact the night of Yoo-jin’s death but only she ended up going through with it.  As Jeong-eon gets closer to discovering the truth each of three remaining women are hunted down by Yoo-jin’s ghost who want them all to finish fulfilling their pact.  The closer Jeong-eon gets to the truth, the more she discovers about her sister and of the nature of the pact itself.

Written and directed by Jong-yong Lee the film is an atmospheric thriller that follows the trend of other revenge ghost stories.  This is but one of several Korean ghost stories that takes place in a school in the series that started with ‘98s Whispering Corridors and includes Memento Mori (1999), Wishing Stairs (2003), and Voice (2005).  These are all films that delve into haunted schools or people haunted by other people yet take place in and around schools.  This film is very much in line with those films and if you’re a fan of this series then you’ll at least enjoy this one.

This is not one of the stronger films in the series as it doesn’t provide anything different than what came before it but it is a well done film with high production values and an interesting story that entertains and never drags despite containing the typical ghost story clichés.  Most fans of Korean horror films will immediately take a liking to the film but casual watchers will be turned off by how mundane everything is presented especially in terms of the fact that this film deals with the real life tragedy of suicide.