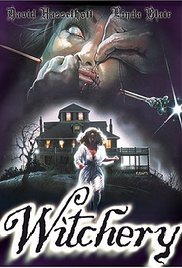 A rich family venture off to an island in   There is also a photography couple looking to discover the truth about the witches and the history of the hotel and they all get stranded on the island during a storm.  Now, waiting for the day to break them each come face to face with the nightmares of the building that begins to take them one by one.
Massachusetts to buy an abandoned hotel only to discover that the former resident is still living their but as a witch who wants to see them all dead.

The film has its moments including starring turns from Linda Blair and David Hasselhoff and despite it being a very predictable horror film the witch elements make it more interesting.  The film is not so much a slow burn but the decaying of each of the ensemble of characters as you watch them become distanced from one another as they die one by one.

The film will satisfy fans of ‘80s Italian productions but audiences who don’t realize the genre (and country) of the film won’t be able to appreciate the film for what it is.
Posted by Kevin L. Powers at 3:42 PM