A group of teens forced into a trip about history get more than they bargained for when they find themselves trapped in an old amusement park and hunted down by a ruthless killer in Jack the Reaper (2011).  A nightmarish alternative to The Breakfast Club finds a diverse group of teens being forced to learn about the history of a nearby railroad and Railroad Jack who haunts it.  When their bus breaks down on the way back to school they search out help at an amusement park that looks open but upon reaching their destination they realize that there is no one there.

They decide to take matters in their own hands while waiting for help by enjoying all that the amusement park has to offer but soon realize that the park is not as abandoned as they once thought and that Railroad Jack is real and out to kill them one by one. 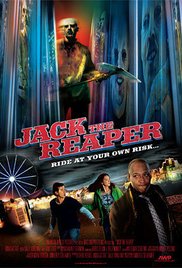 Written and directed by Kimberly Seilhamer this film is actually more entertaining than it probably should be.  It’s your typical teen slasher film but there is so much fun to be had in the film that it entertains despite any of the clichés you’ve already seen a hundred times before.  The gore quotient is high and the energy in the film keeps the film going from beginning to end.  Plus there is also a cameo appearance from Tony Todd and Sally Kirkland so that plays in the film’s favor as well.
Posted by Kevin L. Powers at 12:55 PM