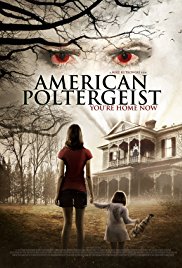 Over the years there have been just as many ghosts & poltergeist films produced as there have been zombie films and for the most part they are truly forgettable.  The same can be said for AMERICAN POLTERGEIST (2015) in which five friends move into a house with only one other tenant that just isn’t really there.  One of the friends Taryn (Ashley Green Elizabeth) starts to feel a strange connection to the house but the more she learns, the more she comes to realize the malevolent past of the house and how she is connected to a serial killer whose spirit is tied to the house and to her.

This being said, this is a pretty standard and bare bones poltergeist film with the jump scares (that don’t actually make you jump) but little in the way of logical plot or interesting characters.  I would forgive the film if it had any interesting gore or action sequences, but all this is lacking as well.  The poltergeist, when revealed, does very little that you haven’t seen before (and done better) and isn’t at all that interesting despite being based on an actual story.

The film is written by Nicole Holland and Michael Rutkowski (who also directs) and despite following the conventions of a typical ghost story it isn’t really executed in any way that would interest either lovers of horror film or ghost stories.