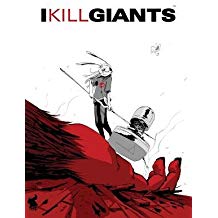 Joe Kelly and JM Ken Nimura’s (writer and artist, respectfully) graphic novel I Kill Giants is part family drama and part fantasy epic in it’s scope of following a young girl Barbara who believes that it is her destiny to rid her town of giants and the even larger gods Titans.

Barbara is a young girl with no friends and a recluse from everyone in the town who believes she’s crazy because she believes in giants and that it is her job to hunt and kill giants.  Most people can’t see them and don’t believe they exist as the damage they cause is usually thought to be the cause of major disasters natural or otherwise.  With her trusty weapon Coveleski she hopes to vanquish the giant she knows is coming even if no one else believes her.  She also has to contend with a school bully, a new school psychology that just wants to get to know her, an indifferent brother and sister who have her own issues, and the appearance of new girl in the neighborhood that just wants to be her friend.

Kelly’s script gets to the heart of an adolescent girl growing up and learning to navigate grief and life and family and friendship even when she believes she has a higher calling.  Barbara isn’t the most likable young girl, but Kelly manages to push the boundaries with his writing of the character.  Nimura’s exquisite drawings perfectly capture the fantastic world that Barbara lives in while balances the real-world elements so audiences don’t realize where reality ends and fantasy begin.

I Kill Giants is filled with characters you will grow to love and respect and at times empathize with.  Kelly and Nimura’s collaboration will leave you going back to re-read the book many time just to get all the subtle nuances of the characters and the world that has been crafted and it is a wonderful world to visit time and time again.