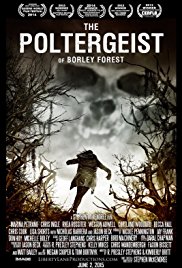 Originally released in 2013 under the title “The Poltergeist of Borley Forest”, AMERICAN POLTERGEIST 2 is not a sequel but more a stand-alone film that has nothing to do with the previous film.  This film has a pretty standard plot in which a teen out partying goes into a forest that the locals call haunted.  She unexpectedly brings back with her a ghost that has become infatuated with her and then she spends the rest of the film trying to get rid of the ghost.

Written by R. Presley Stevens and directed by Stephen McKendree this is a pretty standard ghost story that lacks any defining traits to separate it from all the other dreck being produced.  This film is brought down by the bad acting of generally every actor in the cast and the lack of interesting ghosts or any make-up FX of any kind.  The film meanders through a lot of bad jump scares and incompetent cinematography that produces no suspense whatsoever (this can also be attributed to the horrendous editing).

This is just a bad film all around with absolutely no redeeming qualities (not even entertaining ones).  It’s a shame that ghosts/haunting/poltergeist films have become a new dumping ground for indie film-makers because even with zombie films I’ve seen more creativity than what is on display here.