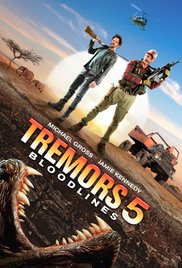 Burt Gummer (Michael Gross) travels to South Africa where the Graboids have returned and deadlier than ever in TREMORS 5: BLOODLINES (2015).  It seems that the Graboids have migrated from North America and found their way to a new continent and a new breading ground.  This film opens with Burt marketing his new videos promoting his latest survival techniques.  When his old videographer leaves for a more production union job in Hollywood, in steps Travis B. Welker (Jamie Kennedy) a fan of Burt’s who wants to help change his image for a progressive future.

When the Graboids surface in South Africa, Burt is called upon to once again bring his expertise to the battle and his new cameraman Travis comes along for the ride to make sure they get good footage.

This film has the Graboids (in all their many different forms) becoming more dangerous and more aggressive than in previous films which is exciting for the series as a whole as it expands the universe but keeps it linked to all the previous films (and television series).  If this franchise has one thing going for it, it’s the continuity of characters which is why fans continue to follow Burt Gummer no matter what he gets himself stuck in.  Travis Welker makes for an odd, but interesting choice for a sidekick this go around.  Travis isn’t quite as interesting as previous sidekicks but when it comes to a Tremors film, it’s the Graboids that are the most interesting thing in the first place.

The film is entertaining in seeing Burt out of his element and in a new country, but the film does suffer from being too much like the original films.  Even though there are some changes and new elements added these additions do little to remind you that you’ve seen everything done before.   This being said, if you’re a Tremors fan then half the fun is seeing Burt and company getting into a new mess.