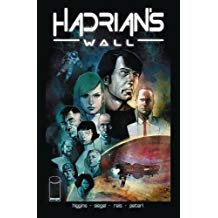 A hundred years in the future there will be a new type of Civil War in space between those on Earth and those on the off-world planet Theta.  When an astronaut mysteriously dies on the survey ship Hadrian’s Wall an uneasy conspiracy may unravel the peace between these two different worlds.  Kyle Higgins and Alec Siegel’s Hadrian’s Wall is a murder mystery thriller about a group of characters trapped on a space station.  Simon Moore is sent to the ship to investigate the death and apparent suicide of Edward Madigan, who just so happens to be with his ex-wife (both of which work on the ship).  When Simon starts to believe that Edwards death may not have been a suicide his investigation into the crew of Hadrian’s Wall leads him to some horrifying discoveries that threaten his and everyone else’s life on the ship.

Simon soon doesn’t know who to trust when anyone on the ship can be the murderer and things just get more complicated when other members of the crew start showing up dead.   Hadrian’s Wall is a tense murder mystery thriller that puts the reader in the same shoes as Simon.

Art is by Rod Reis and Eduardo Ferigato and the style perfectly compliments Higgins & Siegel’s words.  This is a visually tense thriller that also set up a complex and exciting world in which characters can have many different allegiances.  Higgins, Siegel, and Reis all worked together on C.O.W.L. so if you enjoyed that book then you will love this one.