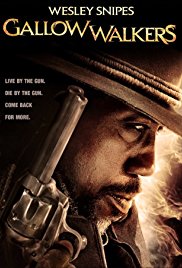 GALLOWWALKERS (2012) is a horror-western populated with the usual gunslingers, whores, cops, and bandits except the bandits in this film don’t die but return after death as undead immortals that kill and feed off everything they encounter.  They are called Gallowwalkers and they are a close in relations to vampires except they can walk in the daylight and they have to replace their outer skin with fresh skin on a regular basis.  On the trail of a gang of Gallowwalkers is the outlaw Aman (Wesley Snipes) who will stop at nothing to kill all the Gallowwalkers that were responsible for the death of his loved one.

There is a lot of style to be had in this film in regard to the cinematography and the production design but the film itself is crippled by a sub-par screenplay and the acting which isn’t at top form.  The most odd and bonkers aspects of the film just come off as incredible uneven because of the direction which can’t bring all the elements together.

Snipes seems to be phoning it in doing a less interesting “Blade” impression.  Although some of the action sequences are quite good, the editing ruins the pacing of some of them.  Some of the scenes would seem more authentic with more attention paid towards the editing and pacing but then there are some scenes that fall completely flat.

There are some interesting elements to the film, but the overall result has too many issues to recommend it an enjoyable film, but it was an interesting idea that was developed.