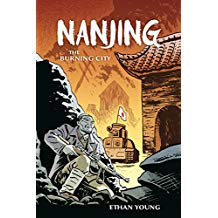 During World War II, the Imperial Japanese Army entered and seized the Chinese capital after the bombs fell and shook the walls of Nanjing.  In Ethan Young’s Nanjing: The Burning City two abandoned soldiers are trapped and desperate to find a way out of the city before they are discovered by Japanese soldiers.

In Young’s wartime nightmare the soldier Lu and The Captain are on a mission to simply survive but when they witness atrocities done to the people that they refuse to help a sense of honor and duty becomes more important to them than just simply surviving.  The characters go tremendous turmoil and tragedy as they think they get closer to freedom and an escape of Nanjing that crumbs around them.

Young’s black and white art focuses on visuals to move the story forward and it is truly a remarkable feat.  War has never looked so harrowing as it does in Young’s story.  This is a great graphic novel for readers who love these type of stories about characters trying to overcome unspeakable odds and human tragedy.