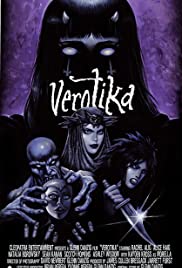 Rocker Glenn Danzig (of The Misfits and Danzing) takes his hand at directing with his anthology feature Verotika (2019) based on stories from his comic book.  I would like to say that there is something to be had in this mixed bag of sexually charged and gore filled film but that is not the case here.

Including the wraparound there are four stories that test the audiences’ endearment of bad acting, mediocre production values, and shoddy directing and writing that can’t be saved by much of anything (unless of course you happen to be under the influence of drugs and alcohol).

In “The Albino Spider of Dajette” Ashley Wisdom is Dajette, a woman with eye balls as nipples and has a co-depended relationship with an Albino human spider creature that comes alive when she is asleep to kill random people.  There isn’t much to the story and even the brief nudity can’t hide the fact that Wisdom was probably the wrong person to lead this film.  In “Change of Face” Rachel Alig is Mystery Girl a Phantom-like stripped who hides her face while killing people in her spare time.  Alig does a better job with her role but is hampered by a predictable story with little in the way of surprises or suspense.  In the third main story “Drukija Contessa of Blood,” Alice Tate is Drukija a countess who buys young virgins from the nearby towns to sacrifice and kill so that she can extend her own life.  Inspired by the Elizabeth Bathory story this is a period set story that shows a little more risk than the other stories but nevertheless is hampered by the same issues.

The surprise of the entire film comes from Kayden Kross who is Morella in the wrap around segments who actually makes for an entertaining host for the entire film.  She actually gives the best performance and looks as she know exactly the type of film that she has stepped into.

The biggest problem with the film is that with Danzig on board, you expect a much better film instead of something that looks like in was made with $1 and done in a garage.  There is plenty of nudity and gore on display in the film but the film offers little else other than that.