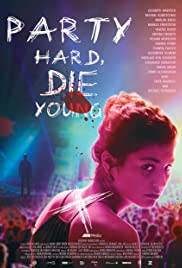 A group of graduates go to a Croatian island for the party of their lives until each of them start getting killed one by one by a masked killer in the slasher film Party Hard, Die Young (2018).  Julia (Elisabeth Wabitsch) and her friends have just graduated and decided to cut it all loose with a bunch of other graduates for a week long party that will define their lives moving forward.  Unfortunately on the first night on the island, while drunk and about to pass out Julia thinks that she saw her best friend abducted by a masked person.  While there is no evidence of her best friend being abducted, something is definitely wrong when a second member of her group suddenly dies.  It’s not long before Julia starts to think that someone is trying to kill the members of her class.

Julia soon discovers evidence that one of her classmates is behind the members but it isn’t long until everyone starts to believe that the murders has something to do with an incident that happened in their past and they need to discover who the murdered is before they all end up dead.

The film is like a sleeker version of I Still Know You Did Last Summer but not nearly as fun.  The film has some amazing cinematography but lacks anything new that would separate it from other slasher films.  The gore effects are also great and the film is a decent time waster but it isn’t anything that will set it above other slasher films with similar story elements.