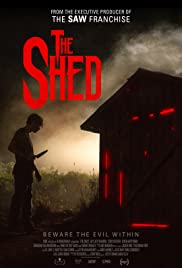 Now, anyone who has read my reviews in the past know that I’m not a big fan of vampire films so I was really looking forward to the movie The Shed (2019) but I’m willing to give any movie a chance.  Written by Frank Sabatella (who also directs) and story by Jason Rice, The Shed tells the story of a vampire hunter Bane (Frank Whaley) who is turned into a vampire by his quarry just before the sun is coming up.  As a vampire he quickly takes shelter in a nearby shed becoming trapped in there until the sun goes down.

Unfortunately for him, Stan (Jay Jay Warren), a bullied hill school student on probation, discovers Bane in his shed and locks him in there.  When Bane kills Stan’s grandfather, Stan doesn’t know what to do since if he gets in any trouble with the law he may find himself in jail.  It’s not long before Stan’s best friend Dommer (Cody Kostro) discovers Stan’s secret but he would rather use the vampire against the people who bully them.

Stan finds himself just trying to keep it all together and sane but that doesn’t seem to go all that well when people that come to his house end up becoming victim of Bane who is trying to find his own way out of the shed.  When Stan almost kills Bane, Bane sees it as an act of war and he will not let Stan get away with the torture.

The most interesting aspect of the film is the way in which it treats bullying.  Stan is bullied at school while Dommer wants to use Bane against their oppressors but then Stan also becomes a bully towards Bane, whom was only turned into a vampire on accident while trying to kill a different vampire.  It’s a well written film with some strong performances throughout until the third act when the filmmakers decided that the third act needed one-liners for the actors to say.  Up till that point, the film had played it pretty straight forward.  Overall I really did enjoy the first two thirds of the film but felt that the last act suffered greatly.  This being said, the film is quite entertaining and extremely well done and Whaley makes for an interesting vampire.  It may not be a phenomenal revelation of vampire film but it is a decent time waster.