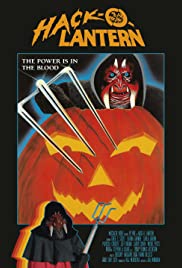 It’s Halloween and it’s the season for costume parties and playing pranks…and worshipping Satan in the film Hack-o-Lantern (1988).  Tommy (Gregory Scott Cummins) has been groomed by his Grandpa (Hy Pyke) in the ways of Satan ever since his father met an unfortunate early death during his childhood.  Tommy is now all grown up and this Halloween season, while his sister and younger brother prepare for the Halloween party, Tommy is getting his mind and body ready for the impending sacrifice that he must take part in so that he can become the Satanist he was born to be.  Unfortunately, when Tommy discovers his sister is to be his sacrifice he must make a chose a side and discover his true destiny.

I make the film out to be more interesting than it actually is.  The story is by Dave Eisenstark while the screenplay was written by Carla Robinson and the film was directed by Jag Mundhra .  The film itself is a pretty basic and by the numbers ‘80s slasher film that borrows very little from the Halloween horror traditions other than to take place on the actual day.

The film is a product the ‘80s video traditions and has aged horribly because of the poor cinematography and acting and the very few actual kills in the film which has made other ‘80s films cult classics.  This is a film that has been forgotten and for good reason with only the title being the curiosity for most horror fans who may have missed the film upon initial release.