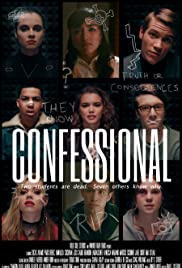 After two college students commit suicide on the same day, seven fellow students with ties to the two are forced to reveal their deep and dark secrets in a confessional booth in the thriller Confessional (2019) from director Brad T. Gottfred.  Someone is manipulating these seven college students with proof of blackmail to get them into a confessional booth surrounded by cameras and they are unable to escape.  Each person, now isolated, is forced to open up to a candid conversation about their two friends that killed themselves because their captor doesn’t believe that they committed suicide but that all seven of the captors had something to do with the “murders.”

The single location story lets up the completely ludicrous situation and set up but it looks good while doing it.  It seems that their captor is filming everything and also has incriminating evidence against each of them so if they don’t tell the truth they will face the consequences which can turn lethal.

The film itself can be seen as a modern take on the found footage tropes that have been established in films over the last couple decades but the captor gives a reason for filming the subjects and why the film itself exists.  Unfortunately, the concept wears itself thin very soon despite the many twists and turns in the script which is where the magic of editing comes into play.  As one character starts to get boring and less interesting it cuts between characters because there are definitely some stories that are more interesting than others.  The good thing is that the entire film does come together by the end with an interesting and surprising amount of revelations.

This being said, some audience members may tire of the film before they get to the end.  Written by Jennifer Wolfe a lot of millage is dragged out of the concept which would’ve been better serviced by a much shorter run time but if you’re not a fan of found footage films then this film will not change your mind about the genre.