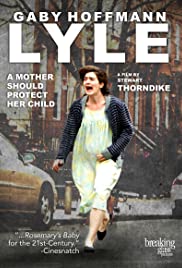 Stewart Thorndike writes and directs the film Lyle (2014) which is about a couple Leah and June (Gaby Hoffman and Ingrid Jungermann, respectfully) who move into a new building with their toddler Lyle (Eleanor Hopkins).  They are greeted by the building manager Karen (Rebecca Street) who also has a room in the same building.  When Leah reveals that she is pregnant with another daughter, Karen also reveals that she is pregnant which throws Leah off due to her age and the fact that she is single.

It’s not long before Leah starts to believe that Karen is lying about her pregnancy among other things and when the isolation from other friends and family causes her to become distracted her daughter Lyle dies in an accident.  The grief of losing her daughter causes Leah to become more paranoid of Karen and everything around her while her partner June sinks deeper into distractions.  Leah refuses to take meds for her grief and depression which may harm herself and her unborn baby.

What follows is a descent into paranoia for Leah and the audience as they try to discover whether or not Karen is bewitching her to steal her unborn child.

The film wears its influences of Rosemary’s Baby very thin but its direction is not as assured despite decent performances.  Unfortunately, the film will overall look like one of the many Rosemary’s Baby clones out there without bringing anything new to the story or genre.  With the exception of following a lesbian couple (very well played by Hoffman and Jungermann) the film lacks the suspense of a good horror film relying more on drama than anything else.  It is interesting to see Hoffman in a starring role but other than that the film is pretty forgettable.