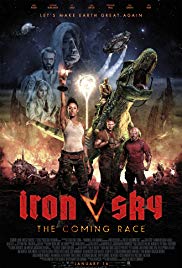 Okay, so, I’m a huge fan of the original film Iron Sky (2012) and I’ve had to wait seven years to finally see the sequel…and it’s totally worth the wait!  IRON SKY: THE COMING RACE (2019) and it’s forbearer is one of those great guilty pleasure films that has so much going for it that you kind of forgive its faults probably because its faults add to its charm.

Renate Richter (Julia Dietze) and the last remaining survivors of Earth after the devastation at the end of the previous film find themselves back on the dark side of the moon on the now former Nazi base.  Years later the base is on its last leg and the only person keeping everything working and operational is Richter’s now grown daughter Obi (Lara Rossi) who is the only one that believes that time is running out and they need to leave the base before it is too late.

Not soon after Obi discovers that Vril Wolfgang Kortzfleish (Udo Kier) has been hiding on the base.  He tells her that if she’s goes back to Earth to a hidden world in the center of the Earth she will be able to find a power source that will extend her and her peoples’ live while providing her a means to power a ship to get everyone to safety.  When a rag-tag ship crashes on the moon she enlists the aid of its captain Sasha (Vladimir Burlakov) to help her get to the center of the Earth and help her.

With the help of Sasha and his ship, her best friend Malcom (Kit Dale), and an eccentric religious leader Donald (Tom Green), Obi plans to take a daring adventure into the heart of the Earth and steal the most precious power source on the planet in order to save her people on the moon.  Unfortunately for her she’ll have to combat Vril Adolf Hitler (also Kier) and his monsters and madmen on an adventure like none other.

If you enjoyed the original film, this one is just as bat-shit crazy but you get Kier in two of his best roles in years, pet dinosaurs, and everything you didn’t know you wanted in a Nazi fantasy film.  Director Timo Vuorensola returns for the sequel and crafts a film in the same vein as Big Trouble in Little China, The Adventures of Buckaroo Bonsai Across the Eight Dimension, or The Golden Child.  Although the film is extremely funny it never veers into campy territory which is why it (and its predecessor) are so effective and entertaining.

The only real gripe I have with the film is that there isn’t enough of Stephanie Paul as the Vril President.  She has so few scenes in the film that her absence is totally a missed opportunity.  This being said, the film is still very entertaining and one not to be missed…unless of course you are one of those few weirdos who didn’t love the first film.