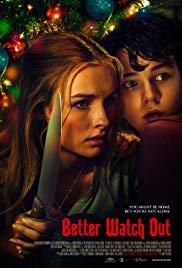 It’s the holiday season and there’s nothing like a good old horror-holiday tale to bring in the spirit of Christmas.  Unfortunately, BETTER WATCH OUT (2016) is probably one of those gifts that can stay wrapped under the tree until the new year.  Robert and Deandra Learner (Patrick Warburton and Virginia Madsen, respectfully) are going out for a much-needed date night and leaving their teenage son Luke (Levi Miller) with babysitter Ashley (Olivia DeJonge).  Luke is too old for a babysitter but he and his best friend Garrett (Ed Oxenbould) have hatched a plan for Luke to make the moves on his babysitter whom he’s had a crush on for longer than he can remember.

Unfortunately for Luke his plans to get closer to Ashley don’t go as planned due to her current boyfriend and the fact that over the years, he has watched her go through one bad boyfriend after another.  Oh, and there is the unexpected arrival of a home invader.  By Luke sees this as a great opportunity to show Ashley that he is better than all her other boyfriends.

When Ashley discovers that the home invader is really Garrett who is trying to help Luke get closer to Ashley everything that Ashley believes to be the truth is turned to question.  But Luke is not willing to give up on Ashley which includes torturing her and manipulating her boyfriends into coming over so he can demonstrate to her what frauds her boyfriends really are.  From there, everything only gets bloodier and disturbing as Luke will stop at nothing to get what he wants from Ashley.

The film itself is actually really well made and the production values are fantastic, but I know my opinion is colored by the trailer as the film is completely different than what I was expecting.  This is a film that’s like a modern-day version of The Good Son with a holiday twist and torture that goes on far longer than it should.  It lacks the finesse that it needs and once the twist is revealed halfway through the film loses its charm.  The performances are good, but the film relies on horror film clichés to get it through the overly long third act.  This being said, the film is still entertaining but holds little replay value.